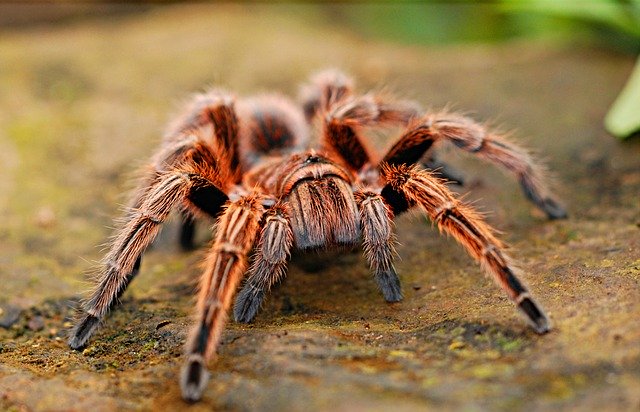 One of the most iconic scenes in any James Bond film is the scene in Dr No where Bond (Sean Connery) is the intended victim of assassination by spider.

Whilst sleeping peacefully in his hotel in the Caribbean, Bond’s assassin releases a large black tarantula into his room. The spider makes its way slowly across Bond’s bed to his exposed shoulder where 007 wakes and comes face to face with this assumed to be deadly arachnid. With a deft flick the spider is sent crashing  to the floor and Bond despatches it with several full force blows from the heel of his shoe.

In fact Bond had little to fear. Although arachnophobia taps into our most primeval fears, even the largest spiders are pretty much harmless. Although tarantulas at 5” or 6 “ across and the Bird eating spiders at twice that size can look pretty intimidating their venomous bite is designed to incapacitate small prey typically birds and lizards and is no more irritating to humans than a wasp sting.

In order to snare their prey some of these spiders construct very large and strong webs and it is this skill that lead us to receive a call from the BBC Natural History unit. They explained that they were making a film about large spiders and wanted to compare the strengths of spider web silk filaments to fine steel wires. We were asked if we could supply some suitable fine stainless steel wires for comparative testing. We readily agreed.

Our partners Ulbrich manufacture very fine stainless steel wires in South Carolina and were happy to oblige. Two reels of 0.025mm diameter 304 stainless steel fine wire were despatched immediately so as to arrive in time for the filming schedule a few days hence. We were later informed that these fine wires fulfilled their expectations. The results will be on TV in the new year accompanied by some very big spiders.

It’s not the giant spiders that you have to worry about it’s the smaller ones that pack the venomous punch. The red and black widow spiders, the aggressive funnel web and red back spiders found in Australia cause the most concerns and in some circumstances if anti venom is not injected in time their bite can be fatal.

For us this request from the BBC is probably the most unusual application that we have had for our stainless steel fine wires but it also demonstrates the quality and service that we are famed for. No matter how large or small or unusual the request or how quickly it is required we can respond. You can’t keep a lady waiting, especially if she’s a Black Widow!